A Singapore subsidiary office is one options that foreign companies choose to use for their Singapore company incorporation. This article provides an overview of the requirements for the incorporation of a foreign subsidiary in Singapore.

Definition of the Term “Foreign Subsidiary”

How to Incorporate a Foreign Subsidiary in Singapore

According to Accounting and Corporate Regulatory Authority (ACRA) Requirement, to incorporate a foreign subsidiary in Singapore, a company must have a resident director, a shareholder, at least S$1 paid-up capital, a physical local address, a company secretary, a company constitution, and a company name.

There are certain required documents to incorporate a subsidiary in Singapore. To incorporate a subsidiary, Singapore resident individual shareholders and directors require a copy of a Singapore IC whereas the non-resident individual shareholders and directors will need a copy of a passport and a copy of residential address proof (e.g. a recent utility bill, residential phone bill, tax bill, or cable TV bill).

Types of banks in Singapore

If a subsidiary is looking for a hassle-free business bank accounts opening experience, opening a business account with Aspire could be a good option. Aspire business account can be opened entirely online with Paul Hype Page. It is free, and no minimum deposit is required.

With Aspire, business owners can have fast and simple access to financial services for their business operations anywhere and at any time through their mobile phones. They can also enjoy cashback for their “online marketing” expenses. Aspire offers cashback for Facebook Advertising, LinkedIn Advertising, and Google Advertising as well as Software-As-A-Service (SaaS) like Google Suite and Mailchimp.

There are also no monthly fees, fall below fees, or FAST transfer fees. More features can be found on their website: www.aspireapp.com.

What Must Be Done After Incorporation of a Foreign Subsidiary

After the subsidiary has been incorporated, there is still much to be done. At this point, the subsidiary exists as a separate legal entity from the company to which it is linked.

Apply for a license

This subsidiary will often be required to apply for a license if it is to operate in any of several certain industries. The subsidiary is to apply for this license under its name.

Of course, the new subsidiary is required to comply with all regulatory requirements in Singapore which are currently in force. There is much information on the Internet about such requirements, so learning about them is not a difficult task. 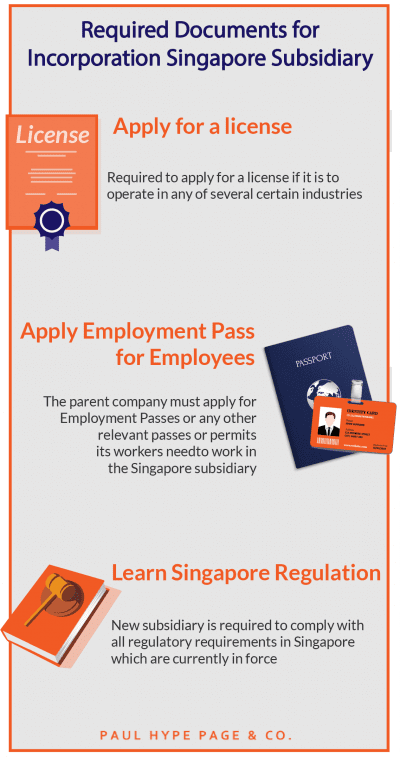 Benefits of Setting Up a Foreign Subsidiary in Singapore

If the subsidiary were to become insolvent, the parent-company may be able to reduce its liabilities to the subsidiary’s assets. It can also prevent these assets from being claimed by a creditor.

If the control and management of the subsidiary are in Singapore, a foreign subsidiary that has been incorporated in Singapore will be regarded as a tax resident of Singapore. This means that because Singapore’s corporate tax rates are among the lowest in the world. Therefore, the subsidiary will most likely be taxed less than it would have been if it had been operating from its home country.

Registration for subsidiary incorporation may be completed online at BizFile+. Therefore, one doesn’t need to go to Singapore to incorporate the subsidiary.

A foreign subsidiary may repatriate any of its capital or profits to its parent company. The Companies Act spells out any capital return requirements which may apply.

Just like any other company based in Singapore, foreign subsidiaries are taxed at the standard corporate tax rate of 17% on taxable income. Should the subsidiary’s annual turnover exceed S$1 million, the subsidiary will also be subject to a 7% Goods and Services Tax (GST) charge on most of the goods and services it supplies.

Subsidiaries that are incorporated in Singapore are automatically registered for corporate income tax after they have been incorporated. The Inland Revenue Authority of Singapore (IRAS) will be duly notified after the incorporation. Subsidiaries with an annual turnover of S$1 million or more will have to register separately for GST status with IRAS.

Must the subsidiary use the same name as its parent company?

A subsidiary does not have to operate under the same name as its parent company. The subsidiary can use any name that is approved by ACRA.

Can the shareholder be a corporate entity?

Yes. The shareholder can be a corporate entity. 100% local or foreign shareholding is allowed.

Does a subsidiary’s parent company have to be Incorporated in Singapore?

Is it possible for a Foreign Subsidiary to be a Sole Proprietorship?