Is it possible to Reduce the Cost of Running a Company in Singapore?

Home>Guide / FAQ>Is it possible to Reduce the Cost of Running a Company in Singapore?

Is it possible to Reduce the Cost of Running a Company in Singapore?

Company owners all over Singapore are interested in discovering the most suitable methods of reducing their company’s operational costs. Doing so would make their respective companies much more profitable, thus generating more wealth for the company owners as well.

Many people are interested in starting a company in Singapore for various reasons. The country is privileged to have a vibrant and growing economy. Its government has also created many policies which have facilitated the creation and growth of many a successful business venture. However, there are some who believe that they might not have enough in the way of financial resources to start and run a Singapore company of their own. Fortunately for such people, there are certain methods by which they can reduce the cost of running a company in Singapore.

On a relevant note, we at Paul Hype Page & Co are always willing to be of assistance with regard to the running of any company based in Singapore. We will work with you throughout the incorporation process until your new Singapore company is officially established. Once we have finished, you will be able to run your company in such a way that it will remain financially stable.

Rental costs in Singapore are often relatively costly. For this reason, renting an office in Singapore is a significant business expenditure, especially for a company which has just begun business operations. Therefore, it might not necessarily be advisable for a new company in Singapore to rent an office in a part of Singapore which is known to have high rental costs. Those who have recently started a company in Singapore should carefully assess the locations in Singapore from which they are considering basing their business operations, then select the location which provides the most advantages relative to the rental cost. It should be noted that the most inexpensive location might not necessarily be the most financially suitable because external costs could cause the overall cost of operating the company from such a location to be higher.

Use of Social Media for Advertising

It is of great importance for any company to advertise itself. Companies which do not advertise themselves in an appropriate manner will not be able to stand out among the competition which exists in their industry. Thus, such companies will end up missing out on significant amounts of revenue from the customers who they have failed to reach. However, advertising can sometimes be expensive. Advertising a company in a newspaper, magazine, or even in public will often incur high costs. However, an alternative does exist in the form of social media. Using social media for the purposes of advertising a company is much less expensive than is using offline methods. There is also a non-financial advantage to using social media for the purposes of advertising. This is because on the Internet, anyone who happens to be on a page with the advertisement will be able to notice the company and its advertisement. Conversely, an offline advertisement requires the purchase of the newspaper or magazine or one’s actual physical presence in the location of the advertisement in order to be seen.

Many businesses in Singapore require specific types of equipment for the conducting of important business activities. However, many new business owners are unable to afford the purchase of such equipment. In such situations, it would not be a financially sound decision to purchase the equipment. 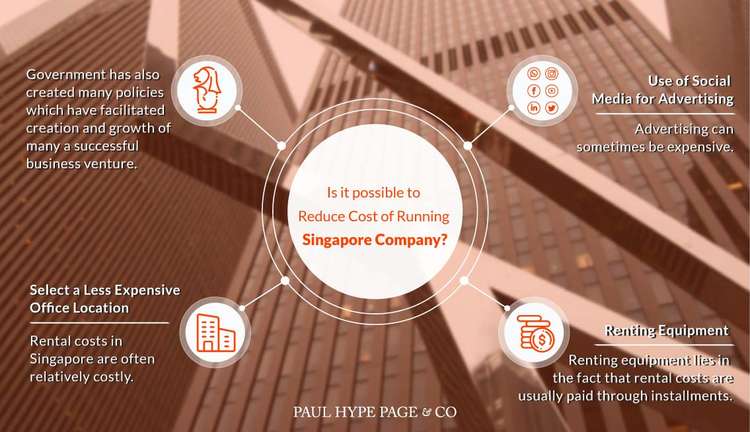 Therefore, company owners in Singapore who are burdened with budget constraints are advised to rent technological and office equipment rather than purchase them. One key advantage of renting office equipment lies in the fact that rental costs are usually paid through installments. In most cases, the costs of these installments can be afforded by the majority of companies in Singapore. Therefore, the rental of equipment for the business will allow a business owner obtain the equipment required without having to spend a large amount of money in one sitting. In this way, the business owner will be able to proceed with all tasks which use the equipment while keeping the company financially stable.